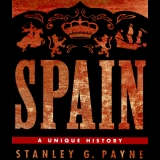 From bloodthirsty conquest to exotic romance, stereotypes of Spain abound. Stanley G. Payne draws on his half-century of experience to offer a balanced, chronological survey of Spanish history from the Visigoths to the present. Who were the first “Spaniards”? Is Spain a fully Western country? Was Spanish liberalism a failure? Examining Spain's unique role in the larger history of Western Europe, Payne reinterprets key aspects of the country's history.
Posted by Kevin Pierce at 3:35 PM