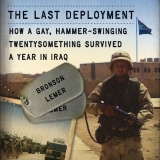 After serving five and a half years as a carpenter in a North Dakota National Guard unit, Bronson Lemer was ready to leave the military behind. But six months short of completing his commitment, Lemer was deployed on a yearlong tour to Iraq. Leaving college life behind in the Midwest, he yearns for a lost love and dreams of a future as an openly gay man outside the military.
Posted by Kevin Pierce at 2:53 PM