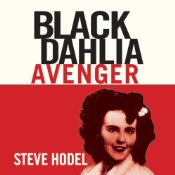 For 56 years, the Black Dahlia murder case remained one of the most notorious unsolved crimes of the 20th century. Now, Steve Hodel, a 24-year veteran of the Los Angeles Police Department, believes he has finally solved the case. On January 15, 1947, Elizabeth Short - "The Black Dahlia" - was found dead in a vacant lot in Los Angeles. The horrific crime shocked the country and commanded headlines for months as the killer taunted the police with notes and phone calls. The murderer was never found.